Upgrade Ubuntu to 11.something 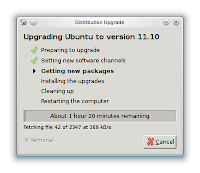 Months ago (after an epic battle with windows 7) I decided to switched full force at home from Windows 7 to a Linux distro. Ubuntu became the weapon of choice and have no regrets.
Now, happy with Ubuntu 10 but version 11.something is out, so what the heck. Lets Updagrade!! Discovered a nice feature that it is posible to update Ubuntu from within the Update Manager. Lets give it a try! 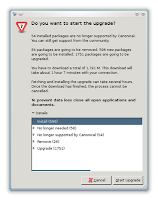 Step one: Click Update Manager. It said that a new version of Ubuntu is available. All happy and curious could it be a full OS upgrade done with a mouse point and click? (like apple? or Android?). I live for risks like this, so lets click away and see what happen.
Well it seems to be going well, a few warning message about a lot that will be removed and so but nothing too critical to abort mission.
I can tell you that estimated time is really estimated time, it took a while more. During the upgrade process I cleaned the apartment floor, did laundry and watch one and a half movies on streaming. Yes the streaming may affected the download time, but who are you to judge.

Anyhow, after a blink of the eyes (3+ hours) this message showed up:

I decided to dismiss all warning messages an restart my PC (by using "sudo shotdown -h" because the menu option did nothing).

However for my surprice it rebooted into Ubuntu 11.something, so it seems that it really did the upgrade. A few wifi auto connect settings missing, but overall it seems to be running. I did reboot the machine three more times into Gnome and KDE to see what is new.

Now I switched from KDE back to the new Gnome since the upgrade may had change what I did not liked before. Now it might be time to end my love affair with KDE and switch forever to Gnome, time will tell.

Overall I grade this process a B+. The upgrade completed and I did not loose any data at all. I do recommend anyone with Ubuntu 10.something to try it. Could be better yes, but this is something that I never thought possible in my days of installing RedHat in a fast Pentium 75Mhz with blazing 16Mb of RAM.
Happy with my Ubuntu, and somehow sad at the same time. Some of the new Gnome features that I like might be copied out from Mac (since Apple had them forever). I am not a Mac fan but even I have to admit somethings they do really good.
So lets resume with my nerdy afternoon clicking away and searching for new "features" on the Ubuntu 11.something. See you!